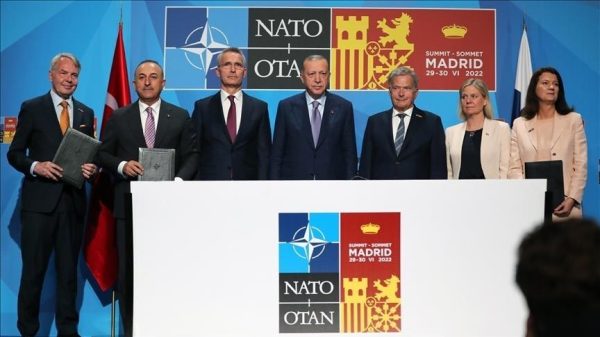 The first meeting of a permanent joint mechanism between Türkiye, Finland, and Sweden was held in Finland on Friday.

On June 28, the trio signed a trilateral memorandum at the NATO summit in Madrid to address Türkiye’s legitimate security concerns, paving the way for Finland and Sweden’s NATO membership.

The Turkish delegation of the mechanism was chaired by Turkish presidential spokesman Ibrahim Kalin and Deputy Foreign Minister Sedat Onal, with the participation of representatives from the ministries of foreign affairs, interior and justice, as well as intelligence services and security institutions.

During the meeting, the working principles of the mechanism were determined, developments regarding the implementation of the commitments made in the trilateral memorandum were reviewed, and concrete steps to be taken in the coming period were emphasized.

Finland and Sweden reiterated that they will show full solidarity and cooperation with Türkiye in the fight against terror groups, especially the PKK, PYD/YPG, and FETO and that they will not support the groups threatening Türkiye’s national security.

They agreed to intensify cooperation at the technical level between the relevant institutions in order to achieve concrete progress on the issues.

Following the meeting, Finland’s Foreign Minister Pekka Haavisto said the talks between the three countries had been positive.

“For Finland, there were no new requests for extraditions, but of course, I can’t comment on Sweden. It was not the main topic of discussion,” Salovaara noted.

The Finnish foreign ministry official went on to say: “We have now begun the work to establish the cooperation mechanism, which is mentioned in the agreement.”

According to a separate statement by the Swedish Foreign Ministry, the three countries discussed the implementation of the trilateral memorandum.

Speaking at a joint press conference with Canadian Prime Minister Justin Trudeau, NATO Secretary-General Jens Stoltenberg welcomed the first meeting of the joint mechanism, saying: “I welcome that the meeting has taken place. I welcome that Finland and Sweden are following up what we agreed in Madrid.”

Referring to a trilateral memorandum signed in Madrid in June to address Türkiye’s legitimate security concerns, Stoltenberg said: “One of those elements was to establish the mechanism where Finland, Sweden, and Turkey meet to ensure that they work more closely in the fight against terrorism.”

Türkiye, a NATO member for more than 70 years, made it clear that it will oppose the Nordic countries’ NATO membership if its security concerns have not been met.