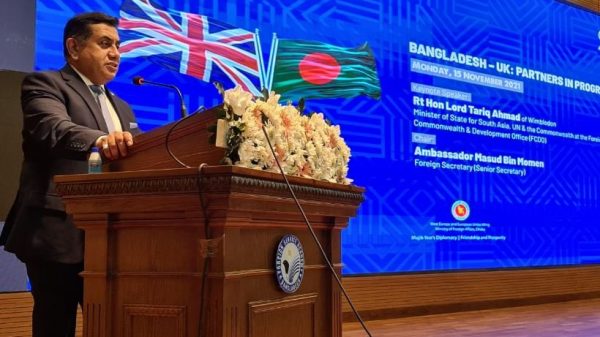 The UK’s Minister for South Asia, the United Nations and the Commonwealth Lord Tariq Ahmad has reinforced Britain’s commitment to deepening cooperation with Bangladesh across a wide range of issues including trade, security, climate change and the Rohingya crisis.

During the visit, Lord Ahmad, who is also the UK Prime Minister’s Special Representative on Preventing Sexual Violence in Conflict, called on Prime Minister Sheikh Hasina.

He also held separate meetings with Foreign Minister Dr AK Abdul Momen and with Foreign Secretary Masud Bin Momen, as well as with representatives of civil society organisations and the humanitarian sector.

In his meetings, Lord Ahmad discussed the path to Bangladesh’s landmark graduation from Least Developed Country Status, which is due in 2026.

The minister set out opportunities for enhanced trade and investment between the UK and Bangladesh, with a particular focus on the service sectors in which the UK is a world-leader, including finance, health and education.

Lord Ahmad also discussed the outcomes of COP26 and looked forward to strengthening the UK-Bangladesh partnership on climate action, which combines expertise and technology alongside the recently-announced £120 million (14.2 billion taka) of UK Aid funding to overcome climate challenges.

During his meetings, Lord Ahmad had the opportunity to discuss the valuable contribution of civil society, media, and academia to the partnership between the UK and Bangladesh.

In his meeting with faith leaders, Lord Ahmad highlighted the importance that the UK attaches to freedom of religion and belief.

He also encouraged further focus on inter-religious dialogue, with particular attention to the intersection between freedom of religion and belief and gender equality.

On 17 November, Lord Ahmad represented the UK at the Indian Ocean Rim Association Council of Ministers.

Speaking in the UK’s capacity as Dialogue Partner, Lord Ahmad said that the type of cooperation that IORA did best would be invaluable in the response to the legacy of the pandemic, climate change and the sustainable use of the Indian Ocean’s maritime resources.

On 16 November, Lord Ahmad visited Cox’s Bazar while he met Rohingya families and community leaders to learn about the persecution they had suffered in Myanmar, and to hear first-hand about the challenges that life in the camps presents.

The Rohingyas were clear that they were keen to return home and stressed their gratitude to Bangladesh of Bangladesh for welcoming and protecting them in the meantime.

The UK minister was encouraged by the increasing presence of law enforcement agencies and the commitment of the government to improving security at the camps.

He said the UK has already provided over £320 million to the humanitarian response to the crisis, and will continue to work with the Bangladesh to support the Rohingyas for as long as necessary until their safe, voluntary and dignified return can be guaranteed.

On 15 November Lord Ahmad delivered a speech to an audience at the Bangladesh Foreign Service Academy, in which he celebrated the first 50 years of friendship between the UK and Bangladesh, and set out his ambitions for the next 50 years.

Lord Ahmad also announced new UK funding of £54 million, that will be invested in two new programmes designed to help ensure disadvantaged girls and young people have access to a quality education.