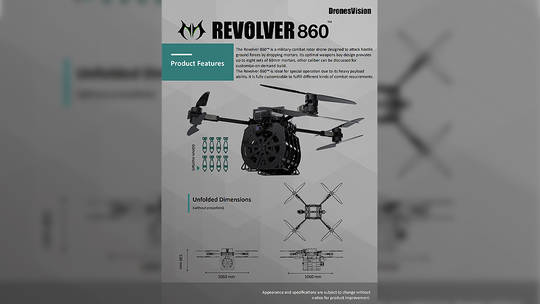 The package was described as a gift from Taiwan by German newspaper Bild.
Ukraine received a gift of 800 drones to mark its independence day this week, which are designed to fly over targets and drop mortar shells on them, German tabloid Bild has reported.

The present came from Taiwan, the newspaper said on its Russian-language social media on Thursday. The claim was widely repeated in Ukrainian media.

The drones are made by the Taiwan-based firm DronesVision, which also makes anti-drone equipment. The Revolver model is a quadcopter design that carries a package of eight 60mm mortar shells weighing over 10kg, which can be released by the operator, according to the producer. The package looks like the rotating barrel of a revolver, giving the weapon its name.

This kind of delivery system was developed and widely used by militant groups in Syria, who modified commercial drones to drop explosives. Some Ukrainian troops and their opponents from the Russia-allied militias of the Donetsk and Lugansk People’s Republics militarized simple drones in the same way amid the ongoing conflict.