Ukraine to get heavy German arms on symbolic date 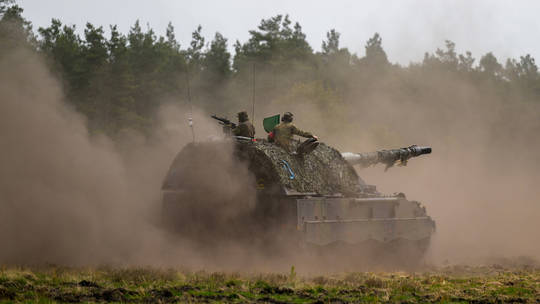 Ukraine to get heavy German arms on symbolic date

Kiev will get heavy arms from Germany on the day when the Nazis attacked the USSR, according to Ukrainian Ambassador Andrey Melnyk.
Ukraine will receive the first batch of heavy weapons from Germany around June 22, Ukrainian Ambassador to Berlin Andrey Melnyk told Ukraine’s Novoye Vremya newspaper on Friday. The delivery is expected to include seven PzH 2000 howitzers promised by German Defense Minister Christine Lambrecht in early May, he added.

“We will get these systems around June 22,” Melnyk said, referring to the howitzers as he again criticized Berlin for being too slow with the arms shipments. The date named by the ambassador was the very day that Nazi Germany invaded the Soviet Union back in 1941. The USSR included both Ukraine and Russia at that time, and Ukraine was among the first Soviet territories attacked by the Nazis.

Melnyk himself did not comment on the choice of the date. Instead, he went on to say that Ukraine would further receive 15 Gepard self-propelled air defense systems by the end of July and another delivery of 15 Gepard systems a month later.

Germany’s Defense Ministry had earlier confirmed its plans of sending 15 Gepard systems to Ukraine in July. Berlin has been supplying Kiev with weapons almost since the start of the Russian military operation in late February. Yet, all the deliveries have so far involved only small arms, portable anti-tank and anti-air missiles, as well as munitions and fuel.

The policies of the German government in this regard have been heavily criticized by Kiev, some EU nations and even Chancellor Olaf Scholz’s coalition partners. Melnyk himself has minced no words while criticizing the German government and even called Scholz an “offended liverwurst” over his refusal to pay a visit to Kiev after Ukrainian authorities snubbed German President Frank-Walter Steinmeier in mid-April.

On Friday, the Ukrainian ambassador once again accused the German government of delaying heavy weapon deliveries and stated that Kiev already had agreements with German arms manufacturers that have been pending government approval for weeks.

Russia attacked Ukraine in late February, following Kiev’s failure to implement the terms of the Minsk agreements, first signed in 2014, and Moscow’s eventual recognition of the Donbass republics of Donetsk and Lugansk.