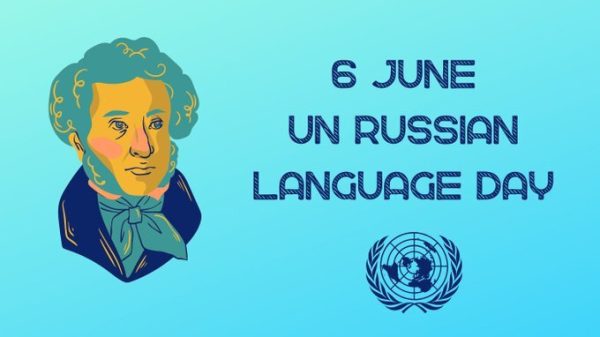 UN Russian Language Day coincides with the birthday of Aleksandr Pushkin on June 6, a Russian poet considered the father of modern Russian literature.

Russian is a Slavic language, whose closest relatives are Ukrainian, Belarusian, and Rusyn (Ukraine and Slovenia). In the 19th century, what we now classify as modern Russian was known as “Great Russian.” Belarusian was called “White Russian,” and Ukrainian was “Little Russian.” Today over 170 million people speak Russian.

UNESCO established this day in 2010.

Peter the Great, Tsar Peter the Great reforms the language, seeking to modernize Russian.
Celebrating Russian Language Day (6 June), United Nations entities held a series of virtual events in New York, Geneva and Vienna, including a poetry reading, a literature recital, theatrical performances and discussions about the Russian language.
It is the 7th most natively spoken language in the world (150 mln people). It belongs to the Indo-European language family, the same as Bengali. It is one of the six official languages of the @UN.
Read us@googlenews