Describing India as a trusted friend of Bangladesh, Prime Minister Sheikh Hasina said the existing problems between the two neighbouring countries could be solved through discussions.

She said this responding to queries from Indian journalists at a reception-cum-dinner hosted in honour to the premier by the High Commissioner of Bangladesh to India at Bangladesh House here.

Quoting the premier, he said, “India is the largest neighbouring and friendly country of Bangladesh and it has a very good relationship with India.”

She said Bangladesh has separate relation with India beyond the political one which was rooted with extending complete cooperation with Bangladesh during the Great War of Liberation in 1971.

“We may have problems. But any problem can be solved through discussion,” she said.

The Prime Minister reached here this morning on a four-day state visit from September 5-8. 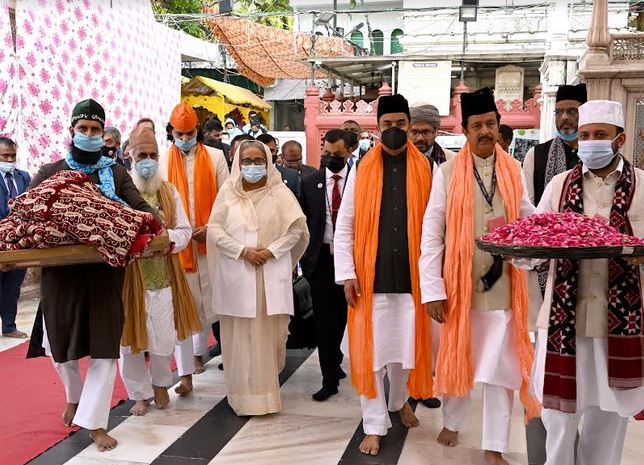 She spent there for some time offering Fateha and munajat.

The premier, later, went around the Dargah of Nizamuddin Aulia, he said.

The almost 700-year-old Dargah is the nerve centre of Sufi culture in India.

Sheikh Hasina was a regular visitor to the famous Nizamuddin Dargah during her stay in Delhi from 1975 to 1981 following the assassination of Father of the Nation Bangabandhu Sheikh Mujibur Rahman.

The Prime Minister will also visit the Ajmer Sharif Dargah in Rajasthan on his last day on India visit on September 8.

The Bangladeshi PM had visited Ajmer Sharif in 2017 and before that in 2010 when she became the prime minister for the second time.

Earlier, the Bangladesh Premier arrived in the Palam Airport in New Delhi at around 11:40 am local time today where India rolled out the red carpet to welcome Sheikh Hasina.

On her first day of India visit, Indian external affairs minister Dr S. Jaishankar paid a call on the Bangladesh premier at summit room of her Place of Residence, ITC Maurya Hotel this afternoon.

The Premier will join a reception-cum-dinner to be hosted by Bangladesh High Commissioner to India Muhammad Imran and Mrs Zakia Hasnat Imran this evening.

On the second day of her India visit on September 6, Sheikh Hasina is scheduled to have bilateral talks and a one-to-one meeting with Indian Prime Minister Narendra Modi at the Hyderabad House.

She will be formally received by her Indian counterpart while a ceremonial guard of honour will be accorded to her there.

After holding the bilateral talks, several MoUs (Memorandum of Understandings) are likely to be signed between the two neighbouring countries while a press statement will be issued later.

Sheikh Hasina later will join a luncheon to be hosted in her honour by the Indian premier.

She is scheduled to pay homage to Mahatma Gandhi at Raj Ghat on September 6.

The next day Minister for Development of North Eastern Region of India G. Kishan Reddy and Nobel laureate Kailash Shatyarthi will make separate calls on her.

She is scheduled to have a call on family members of former Indian president Pranab Mukherjee that day.

On September 7, the Bangladesh premier is expected to address a meeting with top business leaders and a ceremony for awarding “Mujib Scholarship” to direct descendants of soldiers, officers of the defence forces of India, who were martyred or critically wounded during the Liberation War of Bangladesh in 1971.