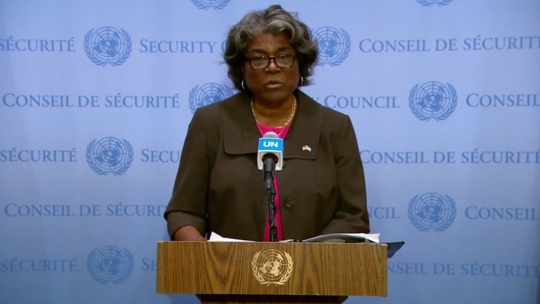 Washington has been ‘very clear’ on which weapons it’s sending to Ukraine, an envoy claims.
While Washington intends to continue supplying Ukraine with weapons, systems that allow Ukrainian forces to attack Russia will not be among them, US ambassador to the UN Linda Thomas-Greenfield said on Tuesday.

“Look, it’s very very simple. We have been clear from day one that we will provide Ukraine with weapons to defend itself from Russian aggression, to defend itself inside its borders, to fight against Russia,” Thomas-Greenfield told reporters at a press conference marking the end of Washington’s presidency over the UN Security Council. “We’re not providing any weapons that will allow the Ukrainians to attack Russia from inside of Ukraine, and President [Joe] Biden has been very clear on that.”

“We’re not going to become [a] party to the war,” she added.

On Monday, Biden confirmed media speculation that the US intends to ship multiple rocket launcher systems (MLRS) to Ukraine. He offered no details beyond saying he was “not going to send to Ukraine rocket systems that can strike into Russia.”

US media outlets have mentioned MLRS systems as possibly destined for Ukraine – the M270 tracked launcher, retired in 2003, or the more modern M142 High Mobility Artillery Rocket System (HIMARS). Both can launch tactical ballistic missiles with a range of up to 300 kilometers, as well as barrage rockets with an effective range of around 30 kilometers.

“Seventy kilometers is more than enough for us,” Ukrainian presidential adviser Alexey Arestovich said on Monday, commenting on what he said were the missiles the US would send Kiev. He also threatened an “exemplary tantrum” if Washington changed its mind.

So far, the US and its NATO allies have sent over 100 pieces of towed and self-propelled artillery to replace some of Ukraine’s combat losses. Since the start of hostilities in February, Kiev’s forces have lost more than 450 MLRS launchers in addition to more than 1,700 artillery pieces, the Russian Defense Ministry said on Tuesday.

Russia has repeatedly warned the US and its NATO allies against sending weapons to Ukraine, and the Western press has worried about retaliation if any of the artillery systems were used to attack Russian territory. Moscow has blamed Ukrainian artillery for more than half a dozen instances of cross-border fire that have killed civilians and caused property damage. Kiev has neither claimed nor denied responsibility for the incidents.

Russia attacked the neighboring state in late February, following Ukraine’s failure to implement the terms of the Minsk agreements, first signed in 2014, and Moscow’s eventual recognition of the Donbass republics of Donetsk and Lugansk. The German- and French-brokered Minsk Protocol was designed to give the breakaway regions special status within the Ukrainian state.