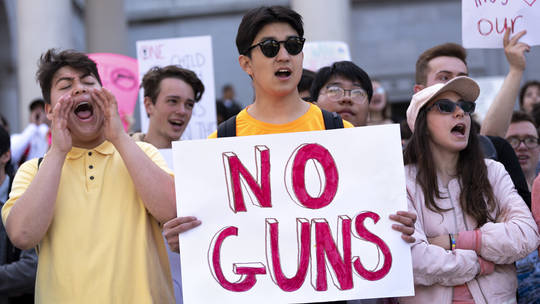 Senate negotiators have agreed on a bipartisan bill in response to a wave of mass shootings.
Members of the US Senate have announced an agreement on a bipartisan deal that could mark the nation’s most significant gun control legislation in three decades. The news comes as lawmakers are facing increasing pressure to find ways to reduce gun violence amid a series of mass shootings.

The legislation will include funding to help states implement ‘red flag’ laws, which enable police to take weapons away from people who are deemed to pose a risk to others or themselves, Senator Chris Murphy (D-Connecticut), one of the lead negotiators, said on Sunday. It also will feature billions of dollars in new funding for mental health services, including a nationwide network of clinics, as well as school safety initiatives.

Senator John Cornyn (R-Texas) was lead negotiator on the deal for the GOP side of the aisle. “Today, we are announcing a commonsense, bipartisan proposal to protect America’s children, keep our schools safe, and reduce the threat of violence across our country,” Cornyn, Murphy and other senators involved in the talks said in a joint statement.

🚨NEWS: We have a deal. Today a bipartisan group of 20 Senators (10 D and 10 R) is announcing a breakthrough agreement on gun violence – the first in 30 years – that will save lives. I think you’ll be surprised at the scope of our framework. 1/ Here’s what it includes:

The Democrat-controlled House passed gun legislation last week, riding the momentum created by mass shootings in Buffalo, New York, and Uvalde, Texas. However, Republicans were expected to block such bills from clearing the Senate, where a 60-40 vote is required to prevent new laws from being blocked by the minority party. GOP leaders have long resisted curbs to gun rights that might infringe constitutional protections against government overreach.

“This is a first step, and it’s actually a lot more than I thought it would be,” said gun control activist David Hogg, who attended a Parkland, Florida, high school where 17 people were killed by a former student February 2018. “This is progress, even if small. Even it stops one Parkland, it’s worth it.”

Other provisions of the Senate compromise include the first ever federal law against gun trafficking and so-called straw purchases on behalf of unscreened buyers. Gun purchasers under age 21 will have to clear more intensive background checks, and new requirements will be implemented for registration of firearms dealers.

Murphy said the legislation also will close the “boyfriend loophole,” meaning no one convicted of domestic abuse will be allowed to buy a gun. “Will this bill do everything we need to end our nation’s gun violence epidemic?” he asked. “No. But it’s real, meaningful progress, and it breaks a 30-year log jam, demonstrating that Democrats and Republicans can work together in a way that truly saves lives.”

Other Republican senators backing the bill include Lindsey Graham (South Carolina), Thom Tillis (North Carolina), Pat Toomey (Pennsylvania), Susan Collins (Maine) and Bill Cassidy (Louisiana), according to Murphy. He conceded, though, that drafting the agreement into legislation and getting it passed by both chambers of Congress won’t be easy.

Still, US President Joe Biden hailed provisions of the Senate agreement as “important steps” toward making America safer. “Obviously, it does not do everything that I think is needed, but it reflects important steps in the right direction and would be the most significant gun safety legislation to pass Congress in decades,” he said.