US pledges long-term support for Ukraine 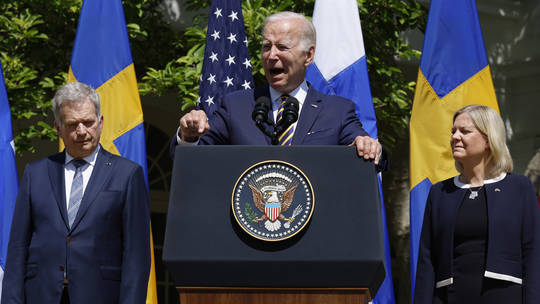 US pledges long-term support for Ukraine

Biden also argued that Russian President Vladimir Putin was “getting exactly what he did not want,” suggesting Moscow had “wanted the Finlandization of NATO, [but] he got the NATO-ization of Finland.” Along with Sweden, Finland applied in the aftermath of the military offensive to join NATO, and both countries’ applications were officially accepted earlier this week.

The US has thrown enormous amounts of money into the Ukrainian war effort, providing $54 billion in economic and military aid, with approximately $12 billion of that in weapons. However, Ukrainian President Volodymyr Zelensky has declared that is not enough, calling for an additional $5 billion per month in financial support from NATO. He referred to the sum as a “fundamental thing, needed for defense and protection.”

Ukraine’s need for support will continue beyond the war, Zelensky hinted, insisting his country should be supplied with protected status, accompanied by “security guarantees.” NATO “must find a place for Ukraine in the common security space,” he argued.

NATO countries met on Wednesday to adopt a new, more explicitly anti-Russia Strategic Concept in which the bloc accused Moscow of having “shattered peace and gravely altered our security environment”, while a “strong, independent Ukraine” would be critical to the bloc’s stability. Nor did NATO stop with blaming Russia for the world’s ills, also targeting China for supposedly using its “economic leverage to create strategic dependencies and enhance its influence.”

Biden on Wednesday declared the US would permanently increase its military footprint in eastern Europe, with NATO Secretary General Jens Stoltenberg similarly promising to beef up its “high readiness” troop presence from 40,000 soldiers to a whopping 300,000.

While Biden’s actions with regard to Ukraine have been applauded by US allies within NATO, their reception at home has been less than enthusiastic. Just 11% of Americans appear to believe the administration’s narrative blaming Russia for ruinously high fuel prices, while Federal Reserve chairman Jerome Powell has publicly disagreed with Biden regarding the president’s claim that skyrocketing inflation is due to the Ukraine crisis.

Meanwhile, as the administration continues to spend tens of billions of dollars to prop up the Ukrainian war effort, the majority of Americans are concerned about making ends meet, and few see backing Ukraine as a high-priority issue as the country heads into midterm elections in November. The president’s approval ratings are at record lows and have been spiraling downward as the cost of living increases.