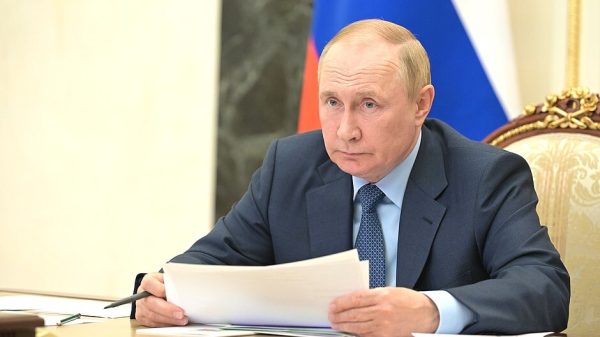 Vladimir Putin held a meeting with Government members, via videoconference on July 25 2022.

The main subject of the meeting was the development of air transportation and aircraft manufacturing.

In addition, a number of pressing current issues were discussed. 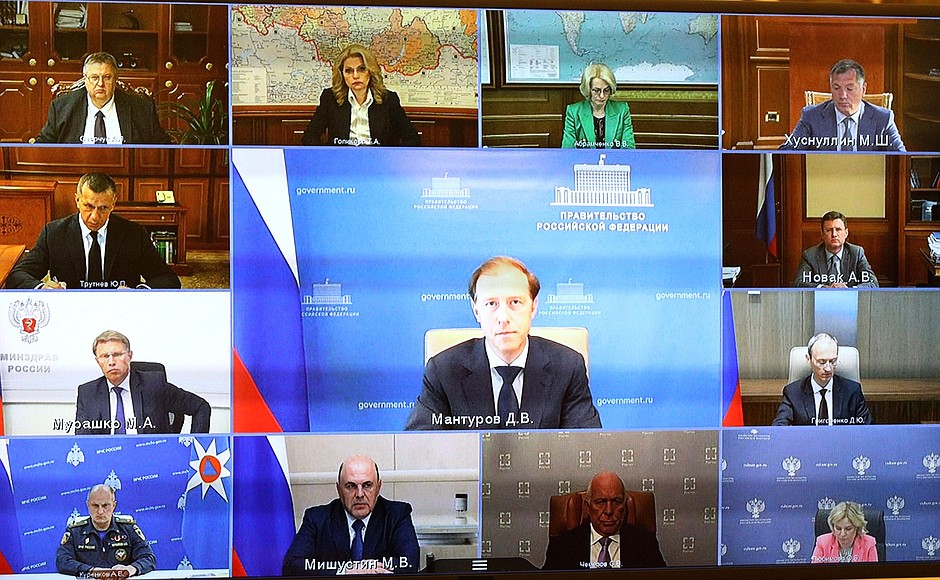 Minister of Natural Resources and Environment Alexander Kozlov reported on programmes to restore the populations of rare animals in Russia, as well as on efforts to fight the fires in the Khabarovsk Territory. Emergencies Minister Alexander Kurenkov also commented on developments in Yakutsk and the Dzhugdzhursky Nature Reserve.

Minister of Culture Olga Lyubimova spoke about the tour and exhibition activities of various institutions and national groups, including theatres and the Russian State Circus, this summer. 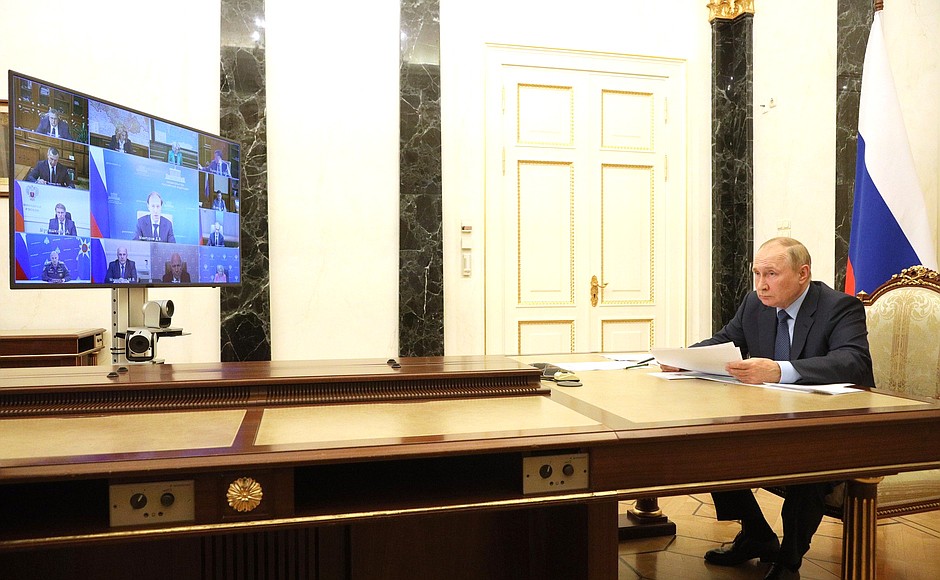 The development of the aviation industry is our main topic today. Here we have many important and interesting issues, not only for the Government, but for several sectors.

First, I would like to raise several other current issues.

In recent years, we have been working to restore and develop the radio-electronic industry. In this regard, one aspect is important, without which it is difficult to develop this industry. I mean the production of high-purity neon. We account for about 30 percent of the global reserves, but only about 1 percent of the international market for this gas.

I know the Government is working to comprehensively change the situation, and I would like Mr Manturov to report on this progress.

Deputy Prime Minister, Minister of Industry and Trade Denis Manturov: We launched a complex to produce high-purity neon just this morning at Bauman Moscow State Technical University. This gas is essential to the world’s microelectronic plants that produce chips with a topological size of less than 180 nanometres. I would like to note that the university team carried out our assignment in only three and a half months.

This new production capacity will use Russian raw materials that are produced with air separation units at metallurgical plants. These units are where we got the liquid oxygen that helped us during the pandemic, and now we are using them for our needs in microelectronics.

Next year, we will build up this production to 180,000 cubic metres and will be able to meet almost a quarter of the world’s demand. In effect, we will replace the amounts that were produced earlier by two Ukrainian plants that are not operating now.

There is also a demand in global electronics and in aerospace for high-purity gases like krypton and xenon. Russia produces 16 percent of the raw materials for processing these gases, and in the past, about half used to be sent abroad for further processing. Meanwhile, Russia’s share of pure krypton and xenon did not exceed 30 percent.

Now we will process everything domestically in line with the restrictions on the export of raw materials and inert gases as such. Under a Government resolution, we will supply other markets with end products only after considering the relevant requests from our foreign partners. So, we are looking forward to their proposals and will be ready to review them promptly.

Thank you very much for your attention.

What share of the world market can we fill in the near future?

Denis Manturov: Ten percent for neon through the end of this year and 25 percent next year. About 30 percent for xenon and krypton as well.

Vladimir Putin: I see; all right. Thank you. 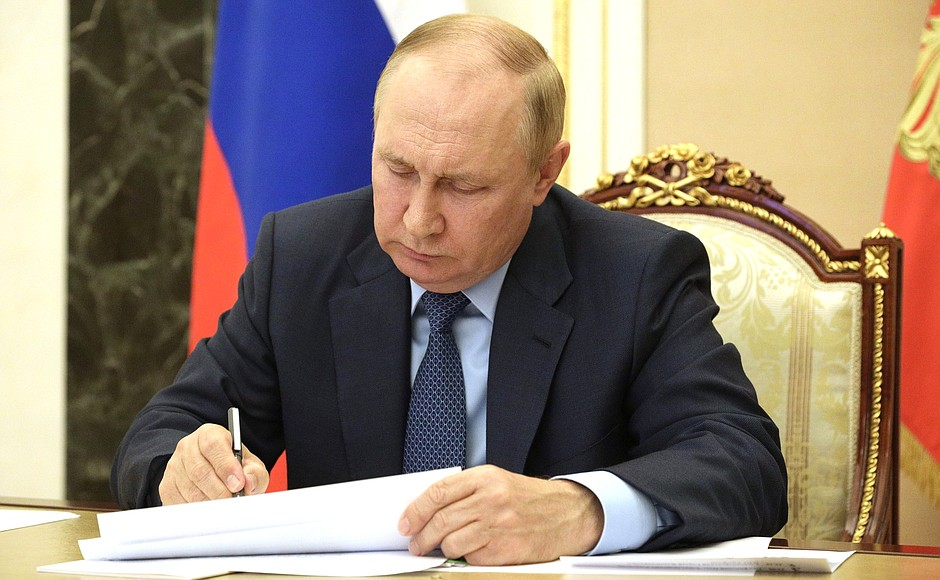 Vladimir Putin: As I said, the main theme of today’s meeting is the development of the aircraft industry and air service generally. We will discuss the current situation in these industries, the efficiency of already adopted measures and the long-term plans to 2030.

Our air services have come under attack with the sanctions, which I would call inappropriate decisions by our former partners – former partners because they refuse to work with us now – and due to the overt political pressure on our commercial companies.

Obviously, the aviation industry is of strategic importance to the country. It encourages the development of high-tech industries and provides work and, hence, jobs for the entire complex of related sectors. It also plays a very important role in ensuring transport accessibility and connections between the regions, which is particularly vital for a big country like Russia.

I would like to remind you that we agreed on priority measures to support air transportation at a meeting on this sector in late March. In part, we decided to compensate airlines for part of the cost of airfares for domestic flights. We did this primarily to support our people, to prevent airlines from shifting the burden of arising difficulties on to the passengers, from resolving these problems at their expense. By now, the Government has allocated 100 billion rubles for implementing this measure – a decent sum.

Of course, we are seeing a certain reduction in air transportation compared to 2021. However, if we look at the dynamics of the situation over the past four months we will also see a clear growth trend. This was achieved, in part, by our decisions to support the industry and stabilise airfares.

I would like to emphasise that the task of building up the scale of domestic air traffic and making it accessible to people will certainly remain a priority this year and beyond. Importantly, we should focus on local, interregional traffic, paying special attention to remote and hard of access areas.

I suggest discussing today in what conditions our aviation industry will operate, starting from the low winter season, and considering the fact that our current support programme runs through October 31. We must think about what we will do after this date. Let’s discuss this today and, if necessary, determine the areas that require additional, comprehensive support, including airports.