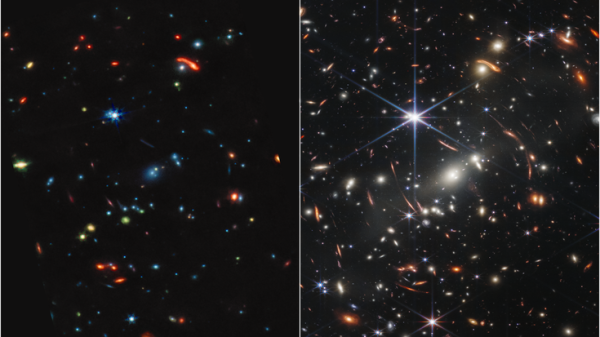 The NASA/ESA/CSA James Webb Space Telescope has delivered the deepest, sharpest infrared image of the distant Universe so far on Monday, July 11 2022.

Webb’s image is approximately the size of a grain of sand held at arm’s length – and reveals thousands of galaxies in a tiny sliver of vast Universe.

This sharp near-infrared view has brought out faint structures in extremely distant galaxies, for an unprecedented look at galaxies billions of years in the past.

For the first time, Webb has also detailed chemical makeup of galaxies in very early Universe. 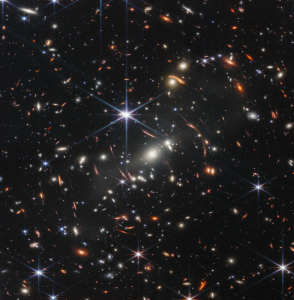 Known as Webb’s First Deep Field, this is galaxy cluster SMACS 0723 and it is teeming with thousands of galaxies – including the smallest, faintest objects ever observed.
Webb’s image is approximately the size of a grain of sand held at arm’s length, a tiny sliver of the vast universe.

The combined mass of this galaxy cluster acts as a gravitational lens, magnifying more distant galaxies, including some seen when the universe was less than a billion years old. This deep field, taken by Webb’s Near-Infrared Camera (NIRCam), is a composite made from images at different wavelengths, totaling 12.5 hours – achieving depths at infrared wavelengths beyond the Hubble Space Telescope’s deepest fields, which took weeks. And this is only the beginning. Researchers will continue to use Webb to take longer exposures, revealing more of our vast Universe.

This image shows the galaxy cluster SMACS 0723 as it appeared 4.6 billion years ago, with many more galaxies in front of and behind the cluster. Much more about this cluster will be revealed as researchers begin digging into Webb’s data. This field was also imaged by Webb’s Mid-Infrared Instrument (MIRI), which observes mid-infrared light. 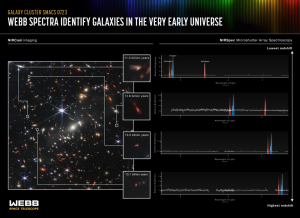 Webb’s NIRCam has brought distant galaxies into sharp focus – they have tiny, faint structures that have never been seen before, including star clusters and diffuse features.

Light from these galaxies took billions of years to reach us. We are looking back in time to within a billion years after the big bang when viewing the youngest galaxies in this field. The light was stretched by the expansion of the Universe to infrared wavelengths that Webb was designed to observe. Researchers will soon begin to learn more about the galaxies’ masses, ages, histories, and compositions. 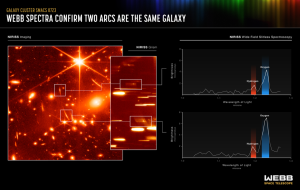 Other features include the prominent arcs in this field. The powerful gravitational field of a galaxy cluster can bend the light rays from more distant galaxies behind it, just as a magnifying glass bends and warps images. Stars are also captured with prominent diffraction spikes, as they appear brighter at shorter wavelengths.

Webb’s MIRI image offers a kaleidoscope of colours and highlights where the dust is – a major ingredient for star formation, and ultimately life itself. Blue galaxies contain stars, but very little dust. The red objects in this field are enshrouded in thick layers of dust. Green galaxies are populated with hydrocarbons and other chemical compounds.

Researchers will be able to use data like these to understand how galaxies form, grow, and merge with each other, and in some cases why they stop forming stars altogether. 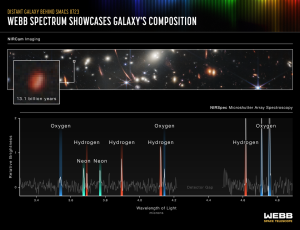 In addition to taking images, two of Webb’s instruments also obtained spectra – data that reveal objects’ physical and chemical properties that will help researchers identify many more details about distant galaxies in this field. Webb’s Near Infrared Spectrograph (NIRSpec) microshutter array observed 48 individual galaxies at the same time – a new technology used for the first time in space – returning a full suite of details about each. The data revealed light from one galaxy that travelled for 13.1 billion years before Webb’s mirrors captured it. NIRSpec data also demonstrate how detailed galaxy spectra will be with Webb observations.

Finally, Webb’s Near-Infrared Imager and Slitless Spectrograph (NIRISS) used Wide-Field Slitless Spectroscopy to capture spectra of all the objects in the entire field of view at once. Among the results, it proves that one of the galaxies has a mirror image.

SMACS 0723 can be viewed near the constellation Volans in the southern sky. 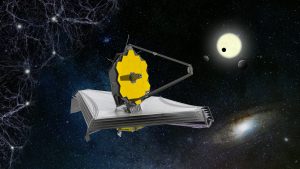 The James Webb Space Telescope is the world’s premier space science observatory. Webb will solve mysteries in our solar system, look beyond to distant worlds around other stars, and probe the mysterious structures and origins of our universe and our place in it. Webb is an international program led by NASA with its partners, ESA and the Canadian Space Agency. 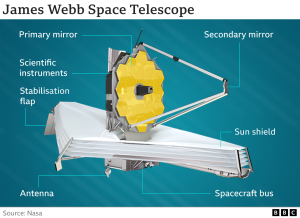 The major contributions of ESA to the mission are: the NIRSpec instrument; the MIRI instrument optical bench assembly; the provision of the launch services; and personnel to support mission operations. In return for these contributions, European scientists will get a minimum share of 15% of the total observing time, like for the NASA/ESA Hubble Space Telescope.